St Patrick’s day is soon upon us! We’ll join you dreaming of that freshly poured pint of Guinness in a busy pub (soon folks, soon) but if you are raising a toast at home or making a signature cocktail for the occasion, put the tacky green die aside and take a look at some proper drinks that are actually from the island of Ireland instead…

NEW to Spirits Kiosk and a brilliant range, Sailor’s Home Whiskey is overseen by Dr. Jack Ó’Sé, one of the most experienced names in Irish Whiskey.

Distilled at the Great Northern Distillery, Their Haven expression is our favourite in the trio. The aroma is filled with warm spice & honeyed oak. To taste, there is a captivating creamy mouthfeel, pot spices, roasted almonds & vanilla notes. Brown sugar, ripe black fruits linger on the finish.

A stellar offering of the Irish gin world,  An Dúlamán is made in County Donegal. Using five-types of locally plucked seaweed it feels as if it's been kissed by the touch of the sea. They've added coastal complexity and depth to a juniper-driven core and in doing so, it's a contemporary gin that's been deeply inspired by its provenance without losing sight of the bigger picture – to be first and foremost a tasty gin.

If a new whisky or a small batch Gin don't float your boat, the big names of the Irish Whiskey scene can offer safe harbour. They are classics for a reason and work across many a cocktail recipe, but in particular make for easy drinking Old Fashioned's and warming Irish Coffee's.

Jameson’s is one of the world's most famous names. The whisky they use is aged for at least 4 years, having been matured in a combination of ex-sherry and ex-bourbon casks.

It' known for its rich texture, dried orchard fruits, fresh stone fruit and a little vanilla making it so easy to sip on.

If you want something with a little bit more bite, try the  Jameson Black Barrel, with its notable aromas of butterscotch, with nutty notes and sweet, spicy vanilla following through to taste.

Bushmills is one of the the world’s oldest licensed whiskey distilleries, having been in operation since 1608. As one of the titans of the Irish Whiskey scene, they've got a few in their range worth discovering, but our pick of the bunch would be the Bushmills 10 year old Single Malt, namely as it's a very elegant and typical example of Irish whiskey.

The whiskey is triple distilled from 100% malted barley, has the distinctive Bushmills' light fruity aroma  to deliver 10 years of maturation mostly in bourbon seasoned barrels, handing over to honey, vanilla and milk chocolate flavours to taste. 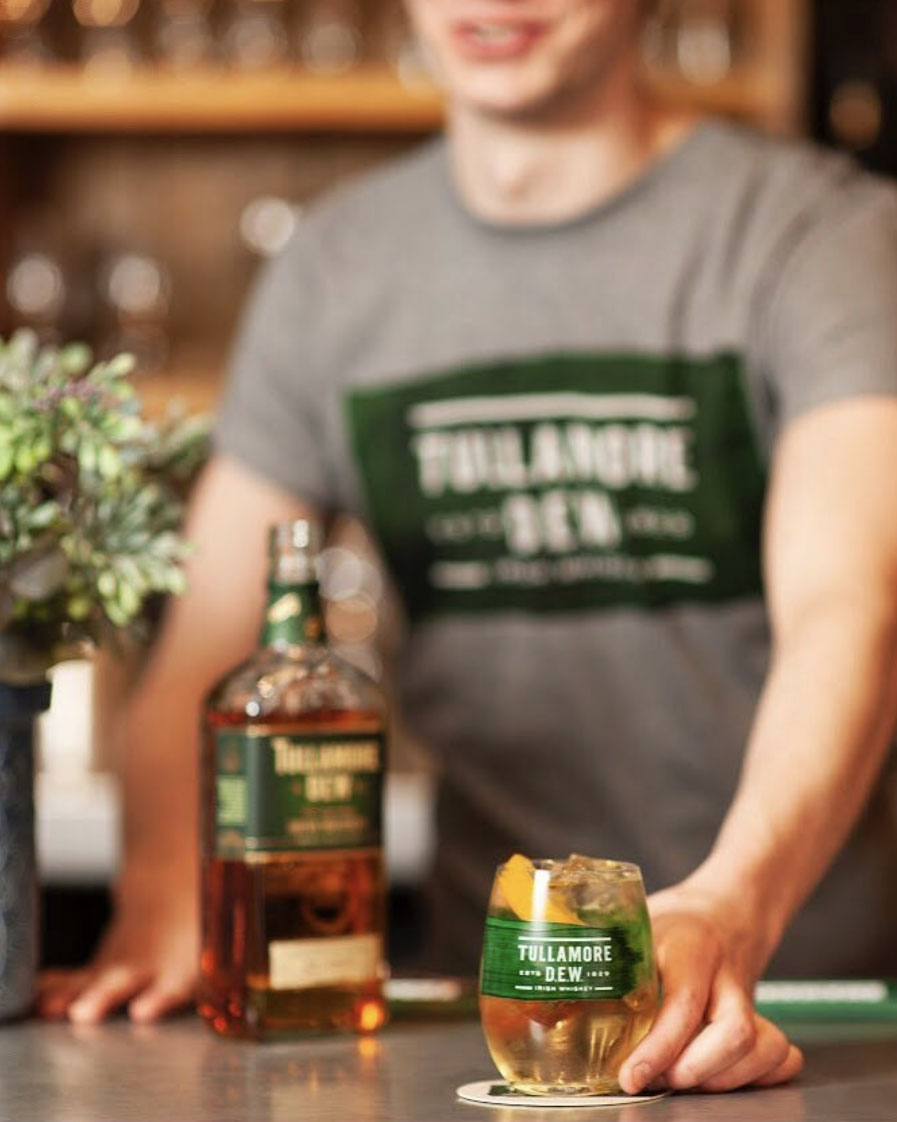 Meanwhile, Tullamore Dew’s flavours (Sherry'd citrus, spice, malty tones and a hint of vanilla) are great for those looking for something to partner up with Ginger Ale or Tonic Water, which sounds mad at first, but trust us on this!

The approachable flavours in the whiskey are derived from their use of three types of grain, triple distillation and the blend of all three Irish whiskeys.

While the emphasis may be on Tullamore's flavour, the reality is that it's also fantastic value too...

Before talking about one last whiskey, let's take a detour via another spectacular Irish Gin,  Gunpowder Irish Gin. It's made at The Shed Distillery in deepest rural Ireland, on the edge of a lake in Drumshanbo, Co. Leitrim.

The inspiration for their gin's recipe comes from the other side of the world however, with gunpowder tea being the key ingredient. As our Gin Curator Olivier explains For those who don't known gunpowder the gin's star ingredient Gunpowder tea is green tea that's been slowly dried then rolled into shiny pellets. As a botanical the flavour is bold and bright with a slight spicy freshness.". Expect a bold flavour and a bright, fleshy citrus taste. Try it with a sweet, juicy grapefruit wheel as a garnish for a cracking G&T.

Last but not least in our round up of formidable offings for St Patrick's Day is  The Sexton Whiskey. Not just a detailed and interesting bottle to grab your attention - Founder and Master Blender, Alex Thomas has created a whiskey that’s delightfully sweet with honeycomb notes and plenty of dried fruity flavours.

You can really tell the maker's touch on this one, with a lot of the flavours imparted from her choice to mature the spirit in sherry casks. We love it neat or on the rocks, but also works well when topped with ginger ale.